The last few days have been a bit of a crash course in politics for me. I had no idea how many interesting characters would actually be in the running for mayor. I honestly thought I would be the fringiest (is that even a word?) character running, but as it turns out I’m actually pretty middle-of-the road.

This is all a new experience to me—I’m looking at this as a complete outsider, so my perspective may be a little naïve. This is by no means a comprehensive, exhaustive, or well-researched list. It’s just what I’ve come across over the last couple days. If I’m off base with any of my assumptions I’ve made, or if you’d like to rebut anything, please let me know in the comments.

Much of the information comes from Wikipedia and the sites it references, and there’s a bit more I read via Twitter. I’ve got a list of candidates (at least the ones I’ve been able to find) here if you’d like to check them out yourself!

I don’t want to say anything bad about anybody, but apparently he’s a white supremacist who is leader of the neo-Nazi Nationalist Party of Canada. In that case I hope he chokes on a chicken bone. I don’t care if you want to throw your vote away, just don’t throw it in this guy’s direction. I’m not going to mention this name again.

Jeff seems to be a really nice guy—probably the one I’d most likely want to sit down and have a pint with. Probably the most respectable of the fringe (should I even say fringe?) candidates, who also keeps his own blog. He’s also another zero-budget candidate, which obviously I think is a great idea.

I really liked the first tweet from his campaign account: “A mayor brings their city into alignment by taking themself out of equation.” It really should be about the people, the position of mayor should be a reflection of the population—not his or herself. He’s got great taste in t-shirts. He appears to have had some PR issues in the last election, but he appears to be doing well this year.

I think we’re supposed to pretend that she’s not running. From what I understand, she’s expected to be the only credible left-wing candidate.

This guy doesn’t know much about politics, nor does he have a platform. But his heart is in the right place, and he’s pretty good at figuring things out on the fly.

An entrepreneur who runs a private member’s club. Sounds like a great guy to know if you are image-conscious and/or into the club scene.

The number one guy for the job if you want to get a pothole filled.

Seriously. This guy needs to say something! Who is he? Perhaps he’s related to the person this street was named after. 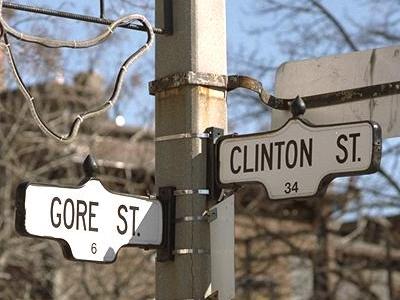 This guy equally makes me laugh and cringe. His campaign slogan appears to be “Vote for Charles. I promise that I’ll do something really small.” Choice tweets include “People, I am the only candidate that can promise I won’t screw up @Toronto because I am lazy to do anything.” and “It’s time senior get a better deal, two for one lap dances on Sunday in all @Toronto’s Strip Clubs”

Diana has run before, and is likely the only candidate who has shown up to a debate wearing a tiara. She is an advocate for people with disabilities.

Matt is a marijuana activist with a huge twitter following. Interests include writing guidebooks for stoners, video games, organizing rallies.

I know little about Stintz and her platform. She hasn’t registered her candidacy yet, because she needs to step down from her position as chair of the TTC first. She’s considered a centre-right candidate (like most). She led a revolt against Ford’s transit plan in 2012. She says that she believes in Ford’s fiscal agenda, but without actually being him. I’m totally paraphrasing, but you get the idea.

My first impression of this candidate is actually really good. He’s another centre-right candidate, who comes from Scarborough. After he answered the obvious first question “have you smoked crack” with “no, I’m not nearly that interesting,” he announced his statement on mayoral transparency and ethics. In a nutshell, he totally copied my first blog post about being transparent, and made it look professional. I’m sure that’s exactly what he was thinking. He also borrowed my future blog post about non-partisanship.

David isn’t a no-budget candidate, but the fact that he’s updating his donor list in realtime, and he’s disclosing when he meets with lobbyists, it’s pretty close.

I believe that every candidate should hold themselves to the same standards as David. Step it up people, this is important!

I don’t know too much about Michael yet, but it looks like he’s taking the high road by not taking pot shots at Ford. Via his twitter:

Looking through twitter at the latest #TOpoli news and I’m starting to see a disturbing trend. Almost every other one is an attack on Ford.
Which I guess is understandable. It’s an election year and he is the incumbent. But swipes at Rob Ford are low hanging fruit…
You’re not going to say anything about the mayor in any wittier or more intelligent than what the staff writers for late night TV have.

Richard sounds like he’s got a lot of supporters in his community, and apparently is a super nice guy. He is a saxophonist, who was a member of the Shuffle Demons. You might know their hit song from 1986, Spadina Bus.

That’s about all I’ve got right now! This is really shaping up to be an interesting race!