This has been split into three parts. This is part 1, which covers everything leading up to the race. Part 2 is of the race its self, and part 3 is everything that happened after the race. Hope you enjoy it!

I couldn’t see anyone, nor could I see any buoys. I went from being okay to feeling really unsafe. Getting to a boat was safely was the priority. It was never a question of should I or shouldn’t I. And then it went crazy. People were screaming for help, and you could here the sheer terror in their voice, especially one man, “help me, please someone help me”. I was yanked out by what turned out to be two direct competitors of mine, crumpled on the floor of the boat and focused on calming myself. At age eight I was a near-drown, so some of this was that same wild eyed fear. The boat next got the man who was screaming and he joined me on the floor sobbing. The comments were the same, “this is my xx Ironman and I’m a 1:10 swimmer.” – LittleCat via beginnertriathlete

I wasn’t expecting to actually do an Ironman this year, especially one this early in the season. I put on a pretty thick layer of winter insulation at the end of last year, so after the holiday cheer I pushed hard to burn it off. I didn’t realize how effective it was until I went for a run and came back relatively pain-free. I figured maybe this year would be doable after all. Then after a comfortable 160k bike ride, split between my swim mates Alex and E, it really seemed within reach.

I think E may not have been completely serious when she suggested coming out to St. George to do the swim and the bike. I joked about signing up for it for weeks, and never thought I’d be able to—but I felt really good so I signed up for the full race anyway. Why not? I was in the best shape I’ve ever been in, and it was still six weeks away.

Days 1 and 2 – transportation and registration

The logistics required just to get yourself down to a race like that are a bit more complicated than most trips. Picking up race wheels and bike box, disassembling the bike, figuring out transportation to the airport (airport limos won’t fit bike boxes), paying extra for the bikes (the way out cost $100), flying, forgetting your iPad on the plane [sigh], picking up your bike and your iPad, lugging the box to the car rental, upgrading to a minivan, driving two hours to the hotel, and lugging the box to your room. 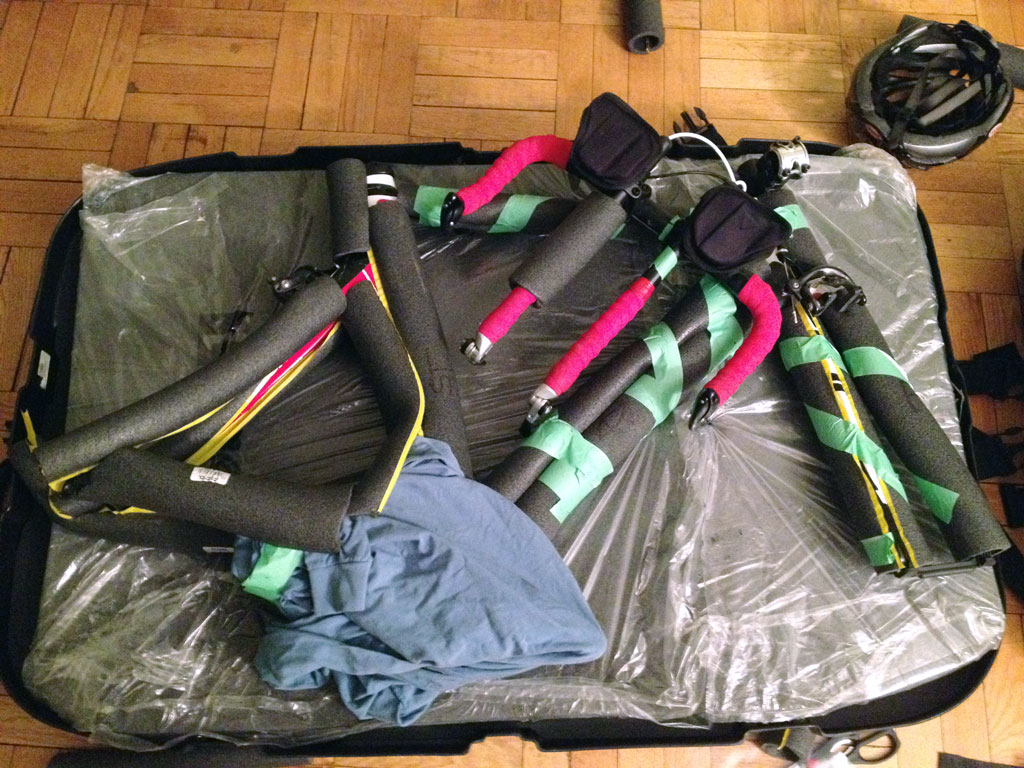 Dana all packed up and ready to go 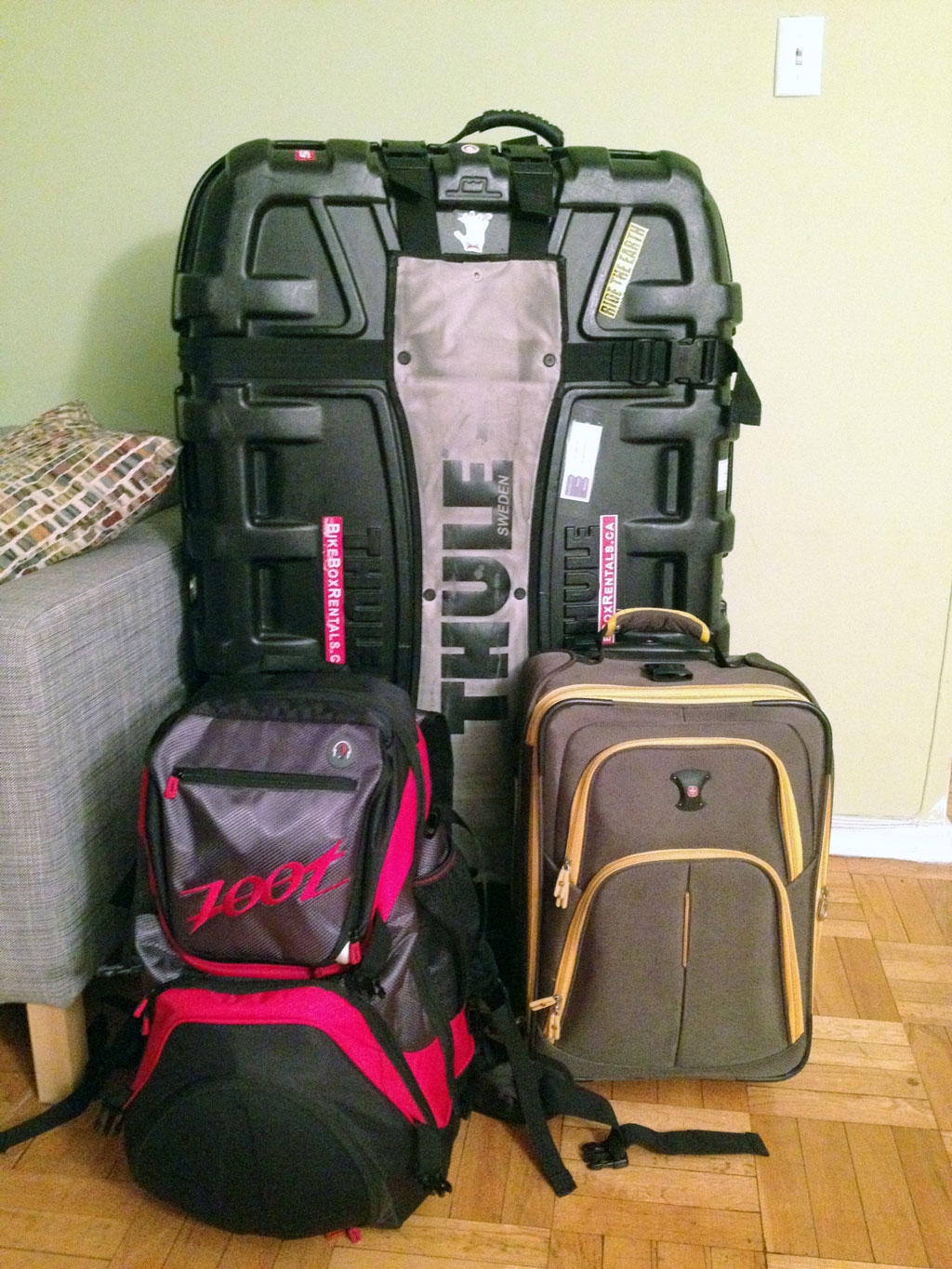 I heard using a service like Tri Bike Transport is worth every penny, but I seriously doubted it until this. If they would have come to Toronto for this race, it actually wouldn’t have cost much more at all, considering I would have gotten away with a super cheap rental car (and saved on gas too). Not to mention the time and effort saved disassembling and reassembling the bike. Next time.

Registration was fast and simple. It was very similar to Syracuse, with a similar-sized expo area. I picked up some CO2 cartridges, some odds and ends, bike bottles. E and I finished the day by doing a lap of the bike course and having some sweet pie at Veyo Pies.

It was an early night—thanks to the time differential, it wasn’t too hard to pass out before the sun set.

We were required to check in our bikes as well as our bike and run gear bags the day before the race. As opposed to Syracuse, this bike transition area was considered a “clean” transition. This meant that the only thing allowed in the bike area was our bikes. Everything else, from our bike shoes, to socks, to nutrition had to go in a separate bag. The same applied to everything we needed for the run.

Another thing that was different for me was that it was a split transition. This meant that our bikes and bike gear go into one transition area, then our bike-to-run transition is done somewhere completely different. This happened miles away in town. So we had to drop off our bikes and gear in one place, then head downtown to drop off the run gear. At the same time, according to E’s training plan, we had to fit in a small workout in each discipline. First a run (which we did from the hotel), then swim, then bike.

It was our first open water swim of the year. I was happy how well I’ve come along with being able to swim straight. The water felt a little crisp at first, but I quickly warmed up, and just got comfortable in the water. I was supposed to swim a bit more than I did, but I was just happy to be in deep open water again.

Next we dropped off our bikes in transition. I wanted to be as prepared as possible, so I took pictures and a short video of where my bike was located. It wouldn’t be hard—I was almost right in the furthest corner, but I wanted to make sure. When I come out of the water I can be pretty stupid sometimes. 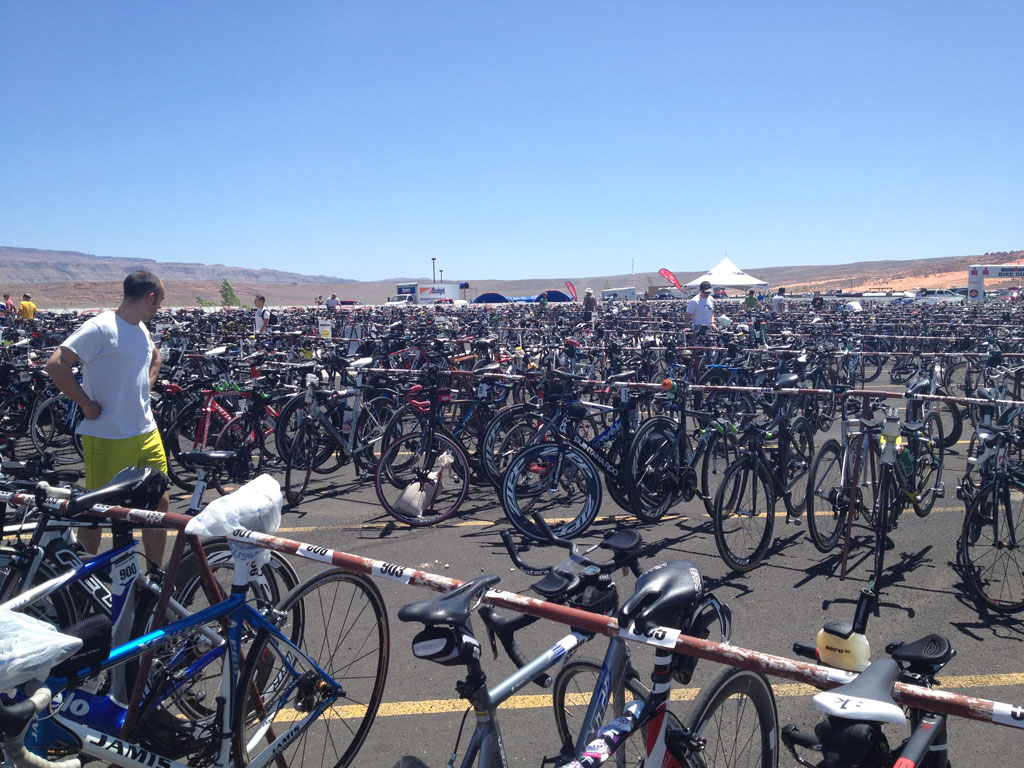 Next I dropped off my gear bag, and made a visual note on where to get it from, as I get out of the water 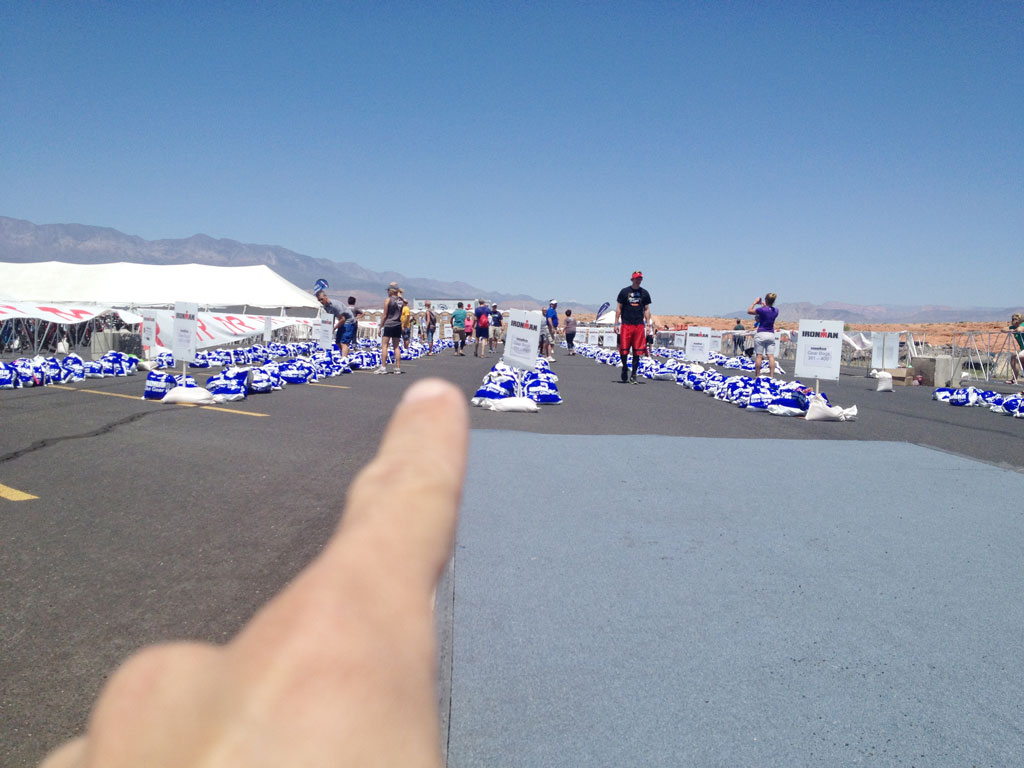 After a quick lunch, we made our way to the second transition area to drop off our run bags. I lucked out again, where this time my bag was in the absolute centre of the area. How could it be any easier to find? 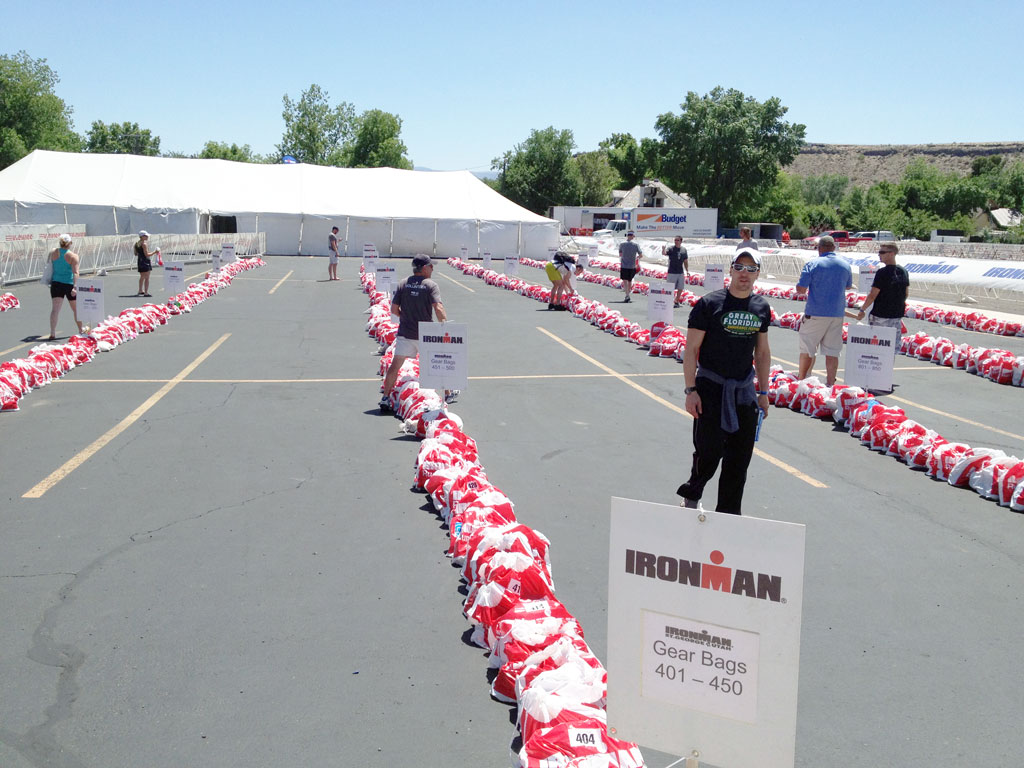 Across the street was a cute general store (St. George is adorable), where we had some ice cream… 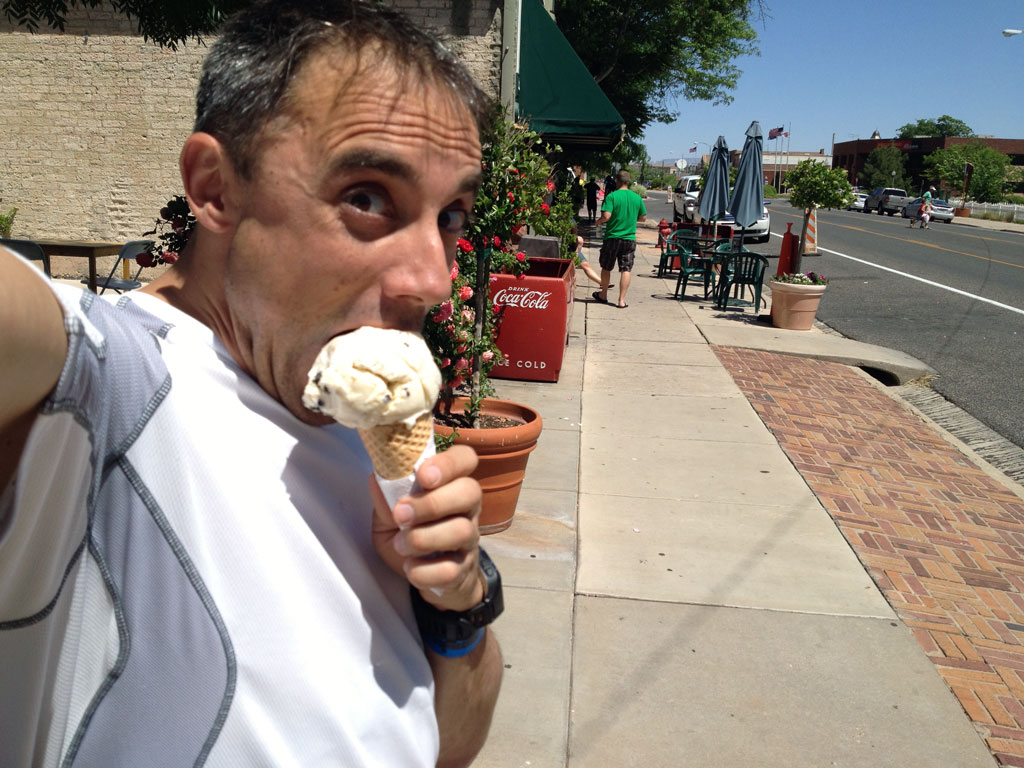 …then I went out for another drive of the bike course. I wanted a bit more video and a few more shots to have a better idea of what to expect. 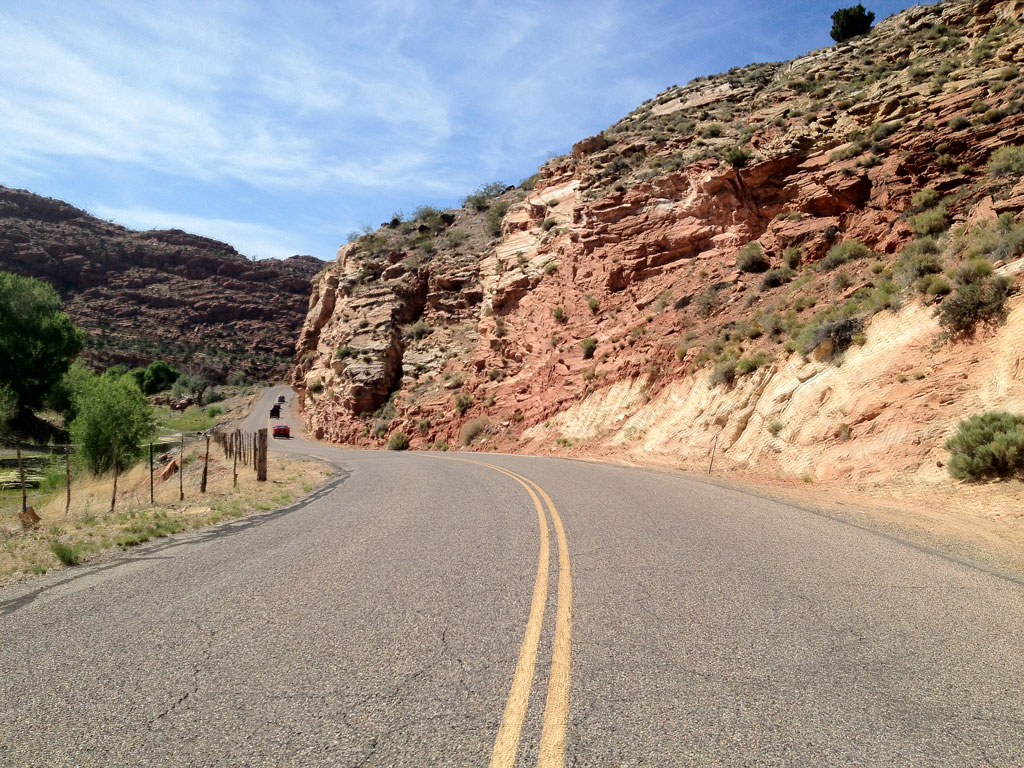 I also got a bit of (what we were expecting to be) the hardest hill on the course—the Veyo Wall. Sorry about the sound quality, it was much windier than expected.

I was looking for something “clean” to eat, so I picked up a broiled chicken and some pasta salad for dinner. By the time I was done eating it was actually time for bed. There was a long day ahead of us… 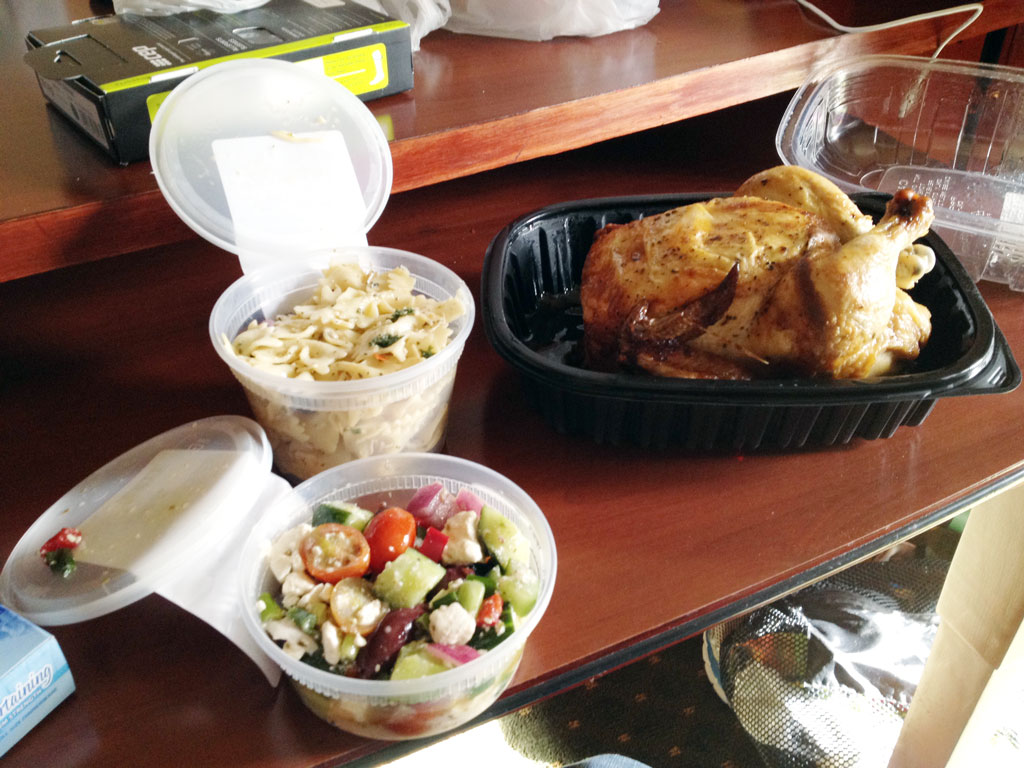