This has been split into three parts. This is part 3, which covers everything after the race. Part 1 is everything leading up to the race, and part 2 the race its self. Hope you enjoy it!

Immediately after the race I was guided by my “catcher,” who is a volunteer who… well… catches a lot of people who collapse at the end of the race. I didn’t think I needed it, but I was wrapped in a foil blanket, and tightly guided past the medical tent (“do you think you require any assistance from the tent?”), and into the food area. I had a couple slices of pizza, and hung out with other finishers and talked about our races.

E came in soon after and we took the shuttle back to the hotel so we could come back for our bikes. We had a bit more pizza and some ice cream sandwiches. We could hear the last finisher in the background, but we couldn’t move quickly enough to get there in time. We did manage to see the fireworks though.

The day after the race was spent doing absolutely nothing. I started my preliminary race report, caught up with all the comments from friends, and read as many reports of the race as I could. I missed the awards, which started at 7:00 am the next day, opting for bed instead. It was worth it. This is where I noticed how bad my burn was. 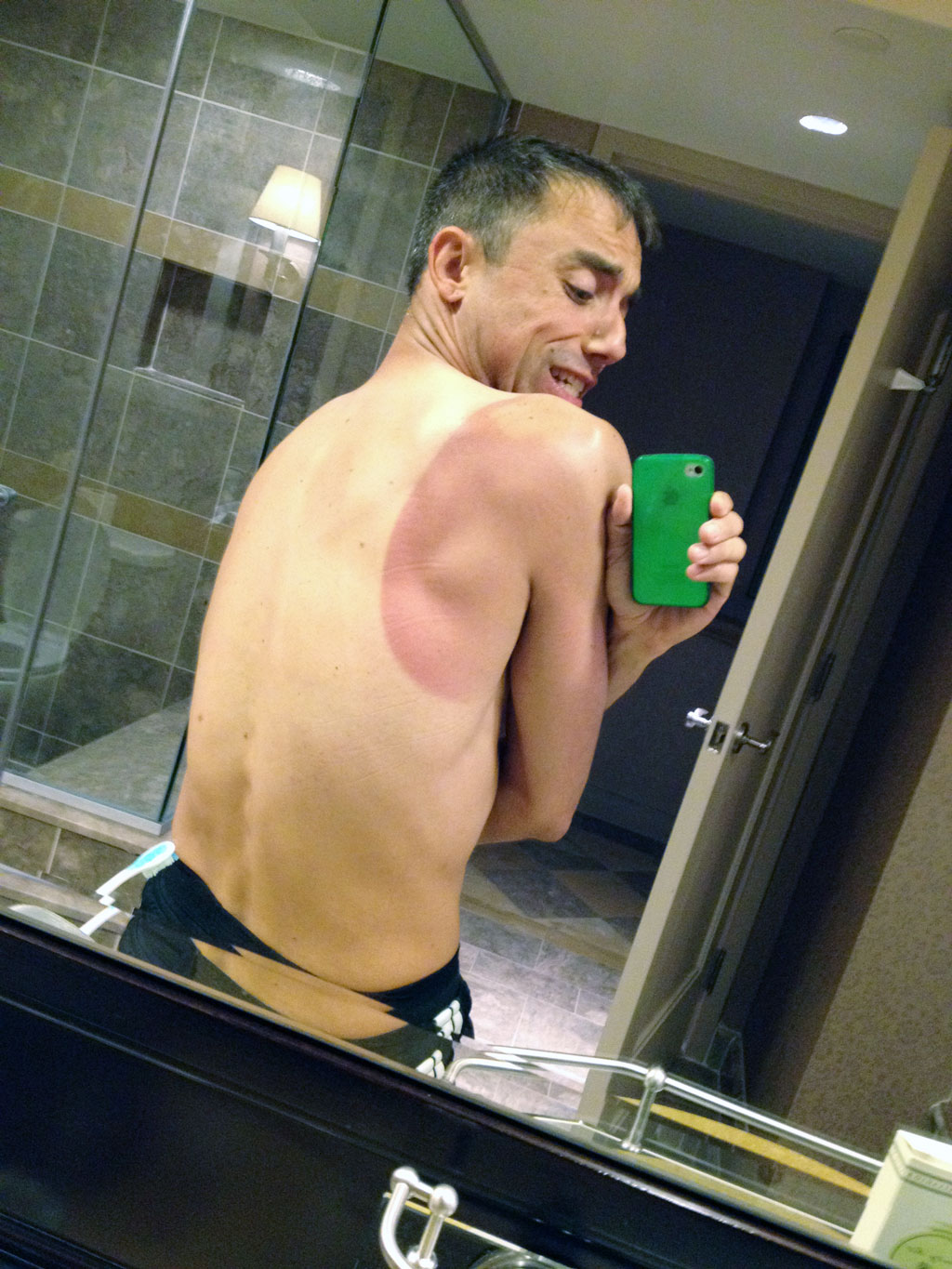 The next day we headed to Bellagio back in Las Vegas. It was one of the best decisions of the trip. It was relatively inexpensive, centrally located, and (unexpectedly) had a 50m pool. Walking wasn’t too painful anymore, so I went around checking out what was different, had something to eat, then went back to the pool to get in a short 900m recovery swim. It was much harder to swim than I expected. I felt very sloppy after all the survival mode swimming I had done a couple days earlier.

Brian from swim recommended a mountain bike tour shop in town. I wanted to do a tour, but they weren’t offering anything during the week for one person. Instead I just rented a full-suspension mountain bike, bought a map, and went out to Red Rock Canyon for what I expected to be a relatively light recovery workout. It wasn’t. 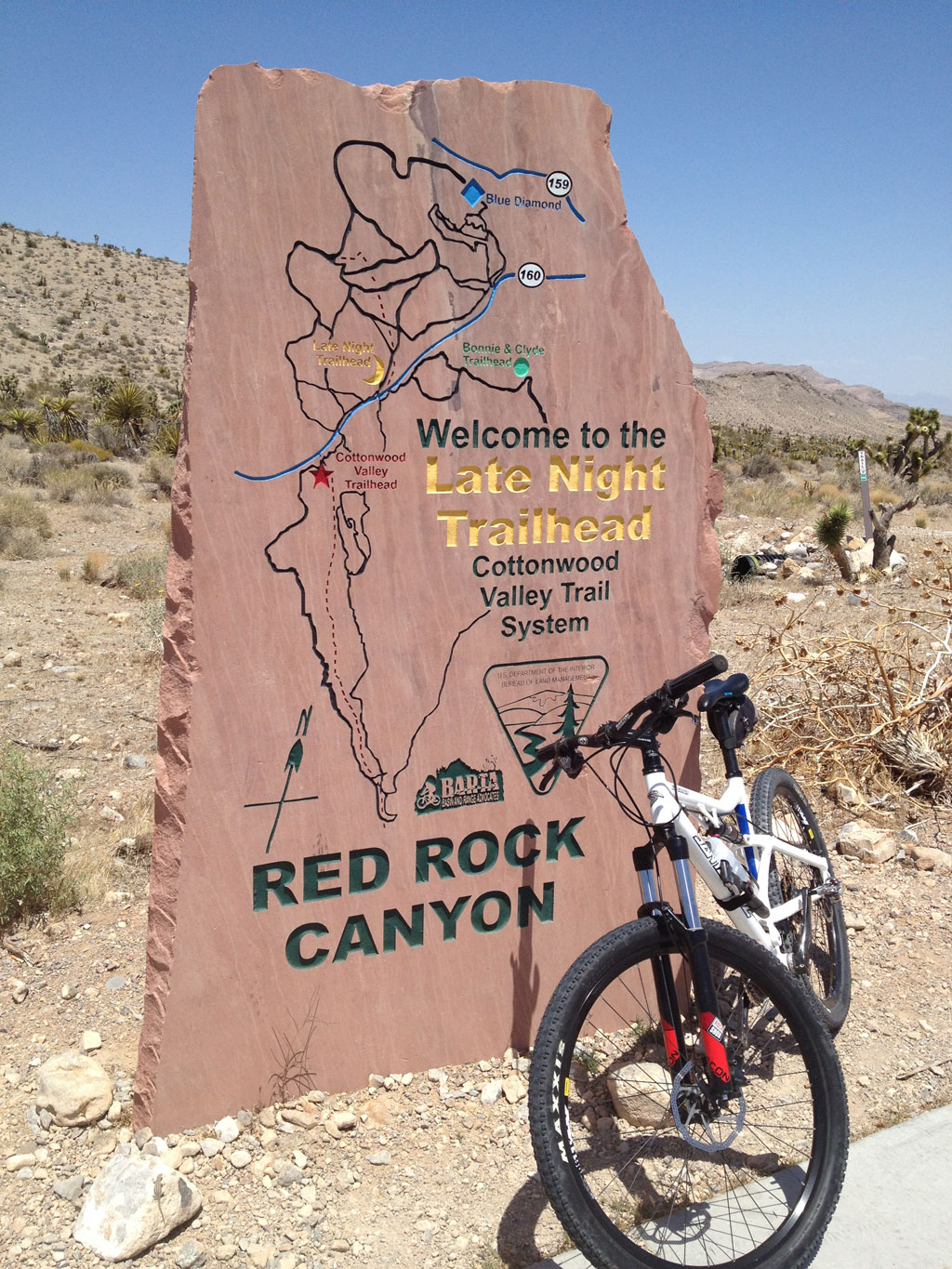 The first loop was one called Dinosaur Teeth. It was classed as an intermediate trail. I wasn’t sure if that was referring to the fitness level required, or the balls required. Turned out it was both. The first 5 km were completely uphill. I was moving along fairly well, and only fell once before I reached the peak. 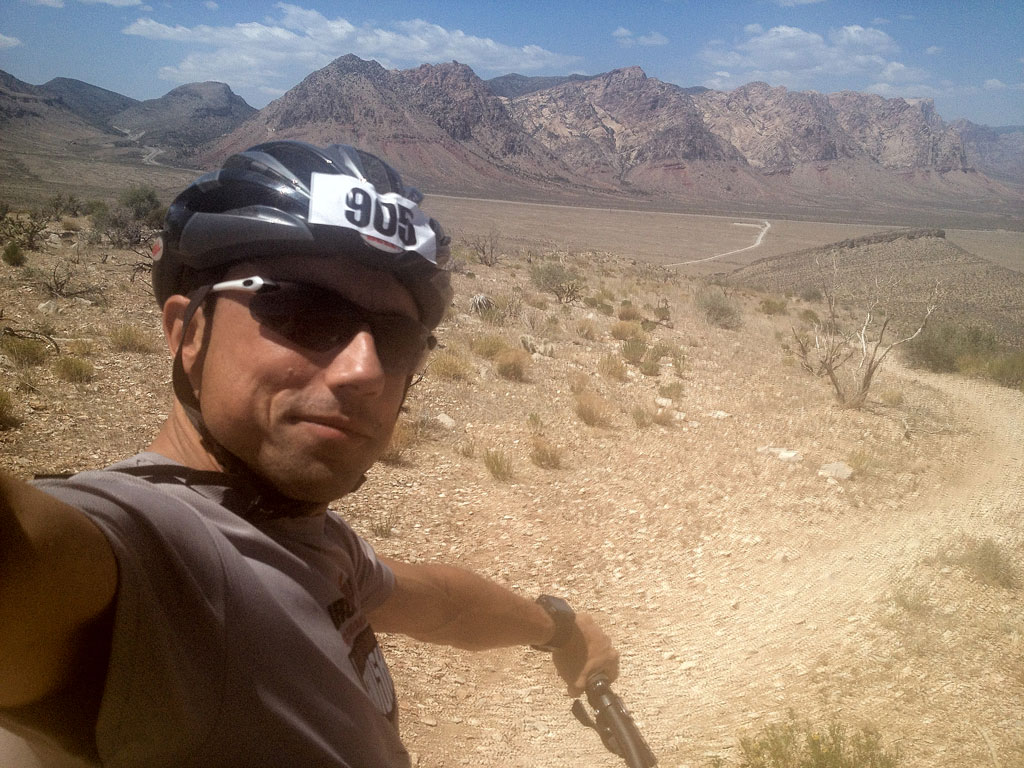 Of course I took some video too. You might want to turn down the sound—it’s still pretty windy.

The descent was fairly technical and fast. I was riding my brakes down most of the way, and there was no way I could stop smiling. I forgot how much I used to love mountain biking. This is something I need to do more of.

The loop was just over 10k, which took about an hour. I used one water bottle and felt pretty good. I went back to the gas station (I must have visited this gas station every time I’ve been to Vegas), grabbed a sandwich and some hydration, and went back out for a different loop. This one was about double the distance. I only had room for one water bottle on the bike, so I downed a litre of water and Gatorade before I left, thinking that would be enough. It should have been—if the ride lasted two hours.

Dead Horse Loop was a much harder trail to follow. I missed the first turnoff, and ended up taking a fire trail to climb the first ascent. Once I met up with the trail it was gorgeous. Every turn the scenery changed. One minute it would be dry, boring desert, then the next the ground would be yellow. Then it would turn pinkish, then deep reds and browns, to rocky whites. The vegetation changed colour and density at the same time. It was surreal. 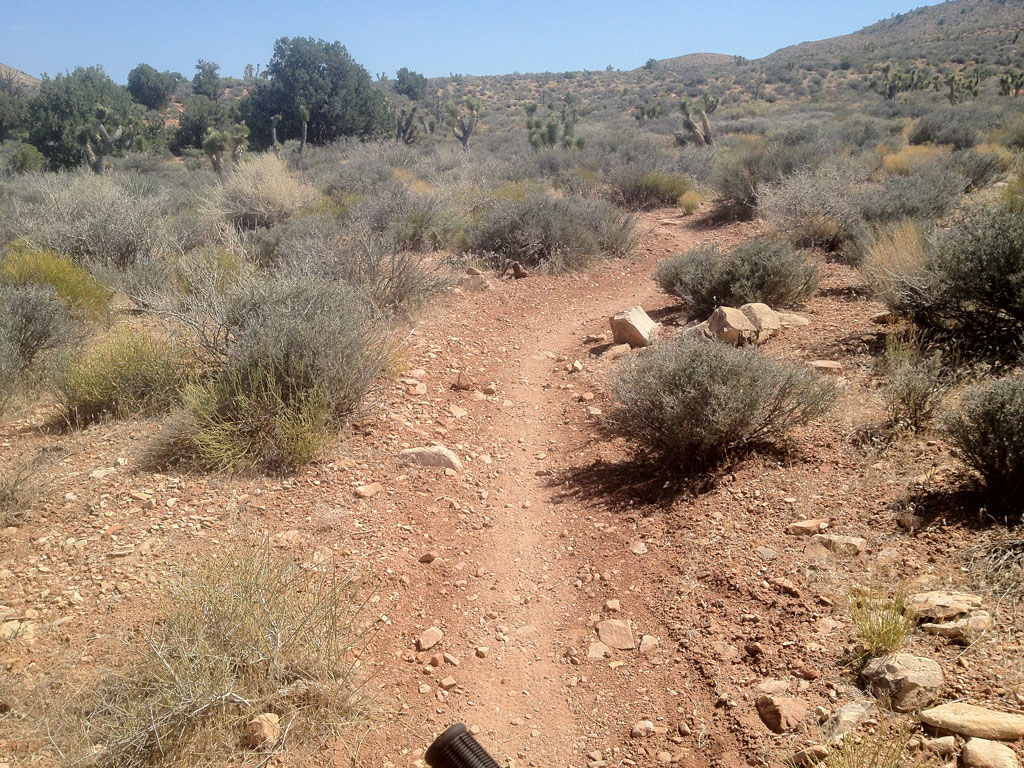 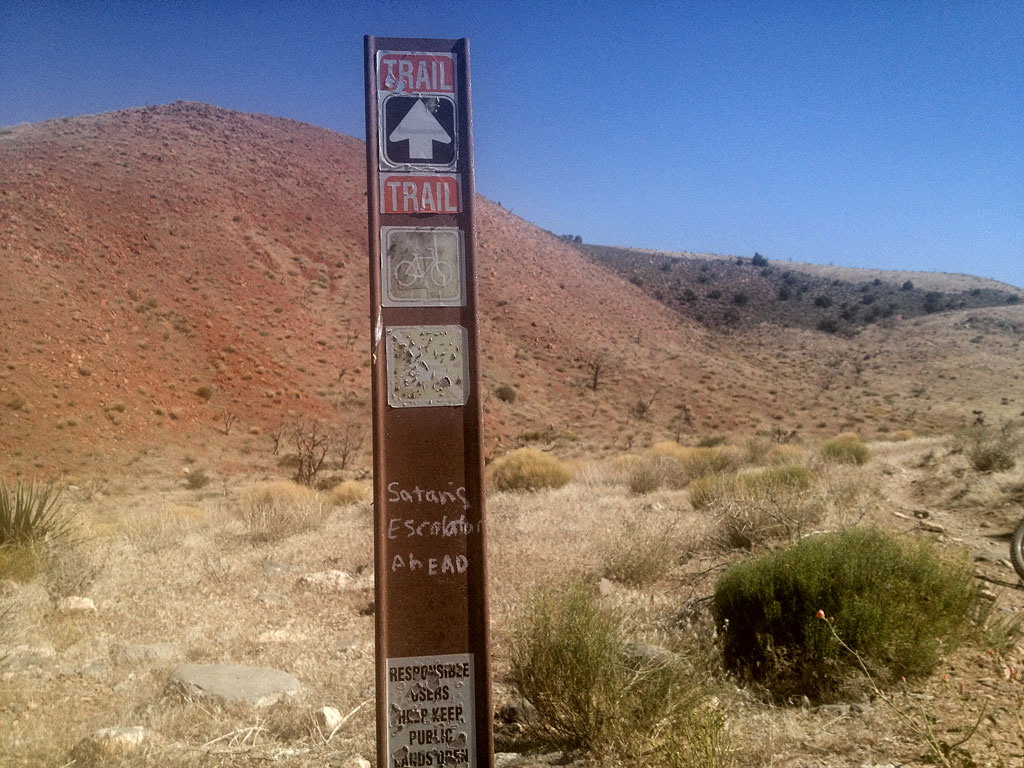 After climbing a switchback (which I thought was the Devil’s Escalator), the climb just got worse. My GPS was showing a 25% grade (it was actually only 19). I had to walk the bike up the rest of the hill, mostly because the rocks were insane. 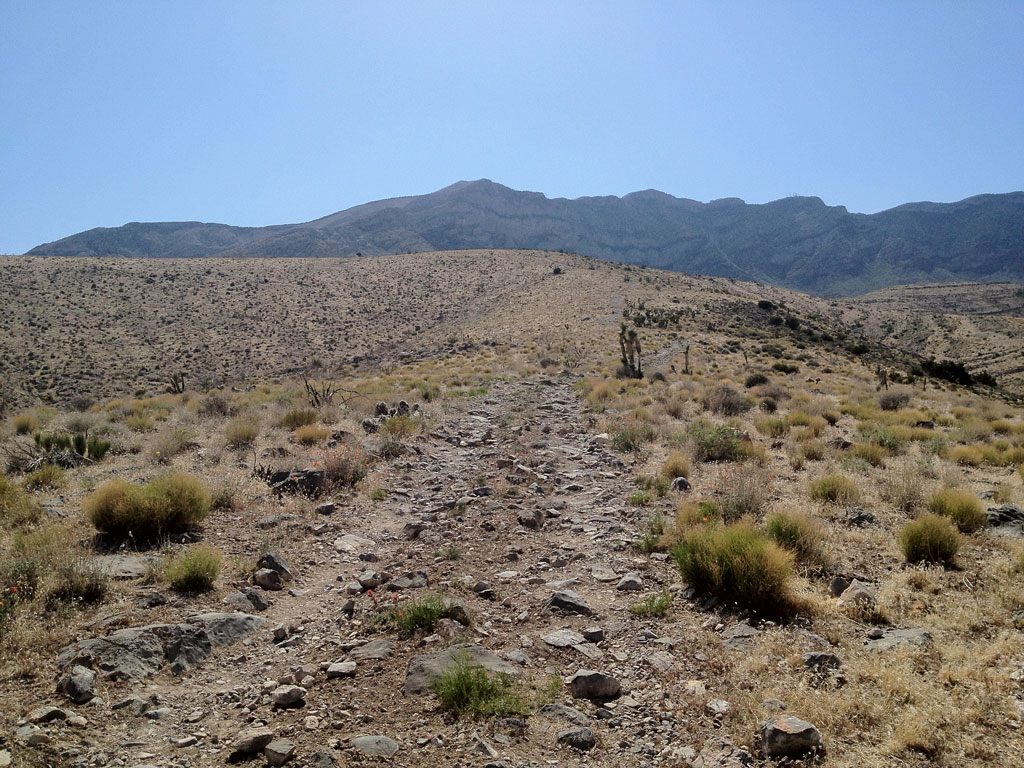 The descent from this wasn’t as much fun. It was still rocky, so I wasn’t able to build up much speed. About an hour and a half in, while still descending this hill, I pretty much ran out of water. I was still traveling away from the car too. This made me slightly nervous. Even though the bike shop said there were always people out there, I hadn’t seen anyone on this trail at all. There were fire trails, but how exactly would I get rescued if something happened?

This is where I decided to turn around without completely following the trail. Apparently I just missed the part where you get a scenic view of Las Vegas from the top of the mountain. Did I mention how much climbing this trail had? It started at 1400 metres, and the peak was 1600 metres—one mile. That’s 600 feet right there, but when you include all the ups and downs the total was 700 metres, or about 2300 feet.

Just after turning around, I came across a pack of wild horses. I really thought wild horses was just an expression. They were spooked by me just before I took this video (and they ran off soon after).

Right after that I started the final descent. I read in the map that it was called the Three Mile Smile. For some reason I was thinking it was called Three Miles in Heaven, which might have been something completely different.

I wish I had some imagery of this, but it was way too amazing to stop. It went back through the deep reds and browns from earlier. It was very technical and very fast. I didn’t take it easy either. All the worry of running out of water was forgotten, and my ear-to-ear smile came back. The three miles were over way too quickly. If I had more time and more water I might have actually done it again. Just amazing.

After dropping off the bike, I quickly drove back to the hotel for a quick dip, got dressed, and started the trip home. It was much easier on the way back, and this time we weren’t charged much for our bikes.